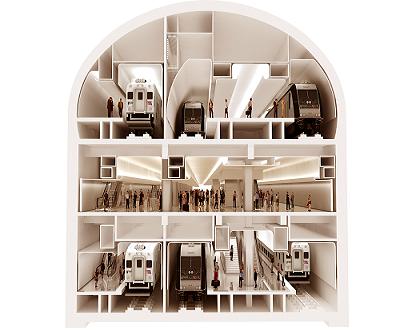 DiGeronimo PC provided architectural design services to support the project’s engineers, including, graphics, 3-D design visualization, and animations.  In addition, DiGeronimo prepared drawings for the partial demolition of an Historic building within the train right-of-way obtaining approvals and building permits for the demolition.

The Trans Hudson Express (THE) Partnership of Parsons Brinkerhoff (now WSP,) URS (now AECOM,) and AECOM prepared the design for the Access to the Regions’ Core (ARC) Project which would provide six rail track lines between New York and New Jersey in two deep tunnel tubes with interconnection points between them in case of a forced closing of one of the tunnel tubes.  The ARC Project replaced the existing 100-year old, aging AMTRAC Tunnel.  The ARC Project was owned by NJ Transit.  The project funding came from AMTRAC, Port Authority of NY & NJ, the State of NY, and the State of NJ.