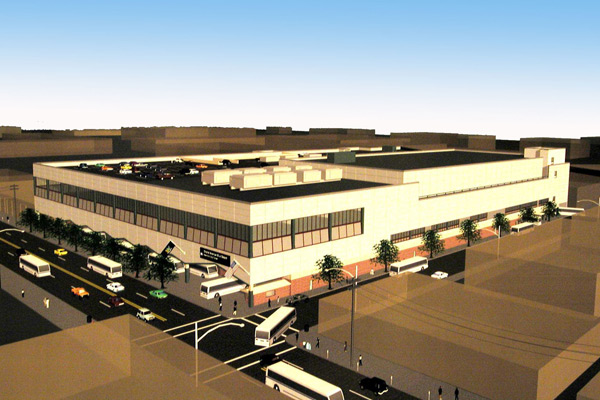 DiGeronimo PC was on the Construction Management Team for the NYC Department of Buses multi-story Bus Depot and Central Maintenance Facility, meeting bus storage and service demands of the Brooklyn Division of the New York City Transit Authority (NYCTA) under the Metropolitan Transportation Authority (MTA.)

The facility was the first and only multi-story bus depot and bus maintenance facility in the nation.  DiGeronimo was responsible for architectural inspections of roof, building facade, windows, exterior architectural elements, and interior finishes.

The project site was located on the north side of Grand Avenue between 47th Street and 49th Place in the Maspeth section of Queens.  Total land area of the irregularly shaped parcel was approximately 255,000 square feet.  This project was the first in the United States to be certified ISO 14001 compliant, showcasing an environmentally responsible bus depot and central bus maintenance facility.

The facility was a multi-storied complex with employee parking on the roof.  The Bus Depot was located on the first floor, with a capacity of approximately 200 buses.  Offices for the Bus Depot was located on a first-floor mezzanine.  The Central Maintenance Facility (CMF) occupied the second floor and had the capacity to maintain 27 buses at one time.  Offices for the CMF were located on the second-floor mezzanine.

This project demonstrated an environmental design excellence that captured ‘sustainability’ as a measurement of and benchmark for the industry.