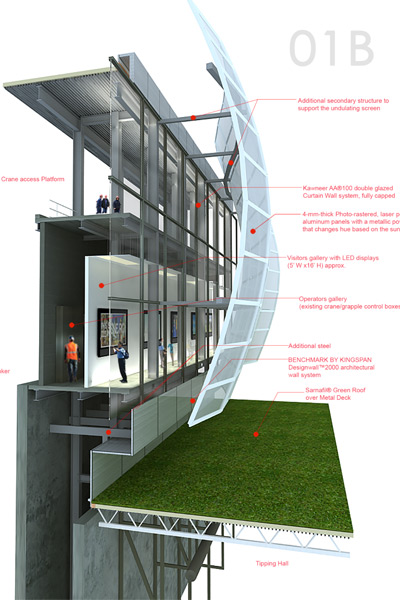 Covanta requested an iconic public image for the facility because of its visible from the NJ Turnpike.  The DiGeronimo design result was a ‘cloud’ shape created out of perforated metal that, when perforations were not punched, spelled out ‘Covanta.’  The monumental graphic would be visible during day light hours; over the night, it would be visible as it was backlit from 24/7 operations.

The DiGeronimo design was in response to the Covanta Community Campaign program to inform and educate the public on the benefits of waste-to-energy resource recovery through incineration.  The Newark facility hosted local business meetings and provided guided tours to children from Newark and NYC schools.  The space between the new facade and the original façade (remaining in place) was a ‘gallery’ used for a series of static displays describing the waste to energy process and showcasing the advantages of waste-to-energy resource recovery through incineration.

The DiGeronimo design included a green roof with the company name spelled out in differently colored lichen visible from Newark Airport and planes flying-over the facility.

DiGeronimo site planning directed the visitor to a separate entrance to the complex complete with a new security gate and signage.  The DiGeronimo site plan design incorporated a ramp to an elevated drive to an upper plaza parking deck for school bus and visitor parking.  With the design, visitors entered the Essex Facility Building at the third floor, the administrative floor.  The DiGeronimo design included space at the outdoor plaza for a placemaking work of art.

The DiGeronimo site plan design also included perimeter flood walls to mitigate the effect of flooding inundation to the complex.