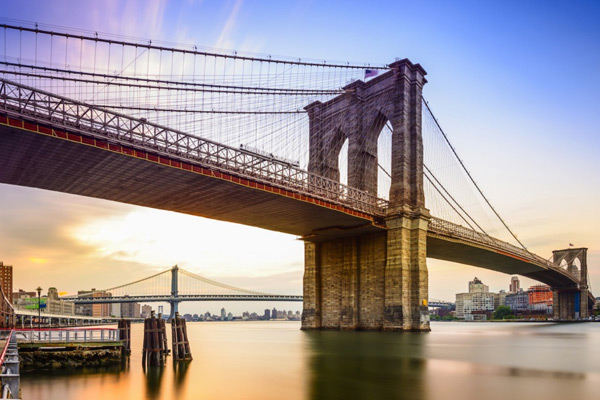 DiGeronimo PC designed the architecture of the adjunct structures supporting the hardening of five suspension bridges in the aftermath of the terrorist attacks on the World Trade Center 9-11 (September 11, 2001.)

DiGeronimo designed the buildings, achieved approvals, prepared construction contract documents supporting the hardening of the five East River suspension bridges, Brooklyn, Manhattan, Williamsburg, Whitestone, and Throgs Neck.  These five structures were within the floodway and navigational channels of the East River, therefore subject to receiving approval from the US Army Corps of Engineers (USACE.)  Three of the bridges were historic, therefore subject to receiving approval from the NYC Landmarks Preservation Commission; the Brooklyn Bridge (built 1883,) the Manhattan Bridge (built 1909,) and the Williamsburg Bridge (built 1903.)

One of the bridges, the Williamsburg Bridge, touched down in a park on Roosevelt Island and therefore was additionally subject to approval by the local community groups of Community Board Eight, including the Parks & Waterfront Committee, the Roosevelt Island Committee, and the NYC Art Commission.  This same one bridge was also subject to receiving approval from NY State because of a land lease.