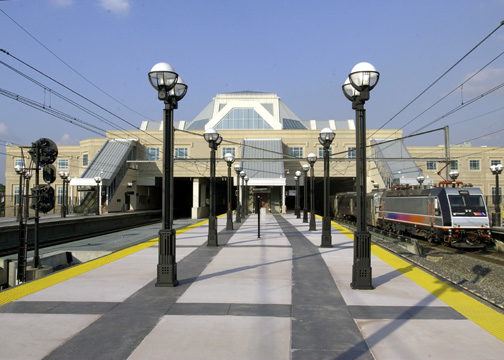 DiGeronimo PC expanded the platform lengths in a separate project in anticipation of increased ridership due to regional sports events.

The challenge was that this portion of the Northeast Corridor was the busiest section of railroad in the Country, accommodating over three hundred trains per day traveling through the project site at speeds of 80 MPH.  Stringent safety requirements necessitated off-peak construction, detailed planning, scheduling, specification, and coordination with Amtrak, Conrail, and NJ Transit.  The new construction of the station rose above the existing complex of train routes without interfering with the scheduled train service in any way.  New temporary railroad lines were installed, and trains re-routed so construction workers could erect structures over existing train tracks.  At the completion of the project, trains were re-routed back to their original tracks.