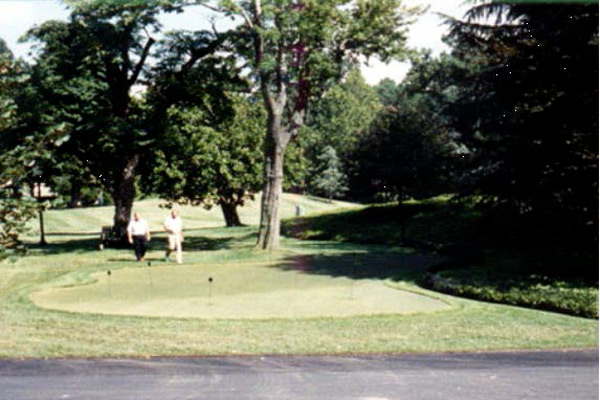 Golf Green. Based on the mandate of no cosmetic impact to the landscape of the South Grounds and following consultation with The White House Historical Society, DiGeronimo designed a new natural grass-like synthetic golf green. The performance of the golf green impressed the President and The White House guests and resulted in a ten-fold reduction in maintenance costs.

Basketball Area. DiGeronimo built a half-court basketball area as a dedication to the NCAA Champions – the Vols of Tennessee and the Fighting Irish of Notre Dame.

Jogging Track. DiGeronimo designed and built a new jogging track, incorporating the jogging surface seamlessly along the edge of the existing roadway. Previously, the high volume of continual use of the roadway for motorcades negatively impacted consideration of the placement of the jogging track along its edge; however, the US Secret Service security concerns over President Clinton’s jogging trips within Washington DC outweighed The White House concerns for grounds maintenance.

Water Infiltration into Building Structures. The Situation Room had been suffering recurring damage due to material stress from leakage from the pool located above. DiGeronimo designed the application of athletic surfacing materials at the pool level, which solved the problem where other design attempts failed.

Movement of the foundations and columns of the South Portico caused the upper deck to crack; consequential leakage resulting in staining and material delamination of the Truman Balcony. Previously, the Balcony required restoration every six to eight months. The DiGeronimo design with materials typically used in athletic surfacing applications had resulted in no signs of leaking, cracking, or delamination in eight years.

DiGeronimo Design at Other Presidential Use Properties.